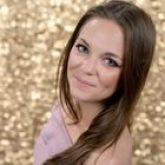 You’ll always hear interesting things when you’re working in a bar. Even when you’re just getting started, talking with other bartenders or servers can be confusing. Rocks, water back, and up—all that crazy bar lingo can trip you up.

While every venue or restaurant has lingo unique to them, there are some terms common to the whole industry that everyone working at a bar should know. Bartenders who don’t speak the common language don’t usually last long!

So, let’s go over all the bar lingo you should know, from A to Z. We’ve put together a cheat sheet of terms and their meanings, just for you.

Our team at Local Bartending School wants your bartender career to be long and prosperous, so read on!

An item is no longer available, either it’s out of stock or pulled from production for quality reasons. Your motivation can also be 86’d. You can be 86’d by getting fired. But don’t do that.

A gratuity put on the check automatically, usually for large parties, events, or other contracted services.

A glass of something milder (like soda or pickle juice) goes with a drink served neat. Also see water back.

A long-handled spoon for mixing and serving drinks. Because of its length, it can reach the bottom of a tall tumbler or jug to mix ingredients.

The giving of a free shot by one bartender to another.

An alcoholic blend of herbs that is used to elevate the taste of cocktails.

A way to make one’s location known when not in line of sight, so nobody runs into anyone behind the bar.

A term for actually working behind the bar. When you work, you’re ‘behind the stick’.

An alternative to coasters, beverage napkins are small paper napkins placed under drinks. Bev naps can be used as a flag system to let your coworkers know a guest has been greeted.

Using an electric blender, to combine ice and ingredients.

This is just pouring into a shaker without shaking it, and then pouring out. It is usually for mixing.

When you over-shake a cocktail or martini, it gets slivers of ice and oxygen bubbles that make it look cloudy. It’s considered amateurish to bruise cocktails, so make sure you know how to properly shake a drink. Our instructors at LBS can show you how, at home or through online courses!

The act of making a drink. A drink is built by adding ice to a glass and then adding a spirit and mixer.

Burning your well, burning the ice:

Using hot water to melt all the ice from your well, leaving it completely dry and empty.

Mix drinks with a dash of scotch.

Essentially this is a drink that’s ordered by specific names, such as Bacardi and Coke or Tanqueray and tonic.

The term is used for anything you take right after a shooter or a neat shot of alcohol. The idea is to ease the taste of it.

The nightmare of closing one night and opening the next morning.

An alcoholic drink that involves liquor, fruit juice, or some other type of mixer.

Tall drink in a tall glass.

The removal of an item from a customer’s check. Happens for various reasons like birthdays, service recovery, or just because.

A variety of alcoholic drinks with different flavors and liquors. For instance: Smirnoff Ice.

The words bartenders or restaurant employees use to warn unseen employees about taking a blind corner. Everyone has their own unique way of saying it, too!

Usually, this drink is sour and oversized. Generally made with rum, it is served with crushed ice, a straw, and fruit syrup for a good bit of sweetness.

A drop or two of the ingredient in question.

Doubling the amount of alcohol that’s typically served. If your house pour is 1-ounce, a double would be 2-ounces.

When you’re working two shifts in one day. Sometimes you get a break, sometimes you don’t. That’s just bartender life, baby! Bring snacks and some energy drinks.

In a martini, the vermouth is reduced.

A drink that is shaken vigorously and sans ice. Mostly used for egg recipes.

A short dose of booze is usually poured on top of a drink so that the first sip tastes powerful. The idea is to give someone the impression that a drink is more alcoholic than it actuallly is.

Have you ever served anyone a feather? Tell us in the comments, we love crazy bartender stories.

Simply put, it is a measurement. Rumor has, two fingers equals 2-ounces of liquor in a rock’s glass. Of course, this varies by the size of the bartender’s finger, so it’s not used like ever, but will make you seem like a pro bartender at least for a millisecond. That’s the whole goal, right?

Before serving a drink, lighting it on fire. This is usually done with shots.

One type of liquor is poured on top of another, or the entire cocktail itself.

The drink is usually fruity and partially frozen. Several ingredients are muddled together and served over crushed ice.

Mixing and creating drinks without a jigger or measuring tool. Reduces profit if not done correctly, so make sure your staff is trained right.

Make a frosty layer of ice around a glass by dipping it in or pouring water over it, draining it, and putting it in the freezer. Do this before close so your glasses are ready for tomorrow.

The addition of orange zests, cherries, etc., to cocktails for either enhancing the flavor or the appearance of the beverage. Add after the drink has been built.

Tables that are taller than the bar that cocktail servers or bartenders tend to cover. Make sure you know which so no one goes unattended!

Drinks served in tall Collins or highball glasses. Usually have a spirit and non-alcoholic mixer in them. Compared to a rocks glass, it holds effervescence better for drinks with carbonated mixers since it doesn’t become flat as quickly.

Drinks from the wells or rails at the bar instead of top-shelf and premium drinks. Also can be referred to as how many ounces of wine is served in a glass, which usually varies from 6 to 9 ounces.

When someone is so stacked with tasks, they can’t keep up. Or think straight.

Usually poured on top of a drink, this ingredient is the last to be added to it.

Inversion of the shot or drink by pouring down the sides of the glass or over the spoon; done by pouring a heavier alcohol base over a lighter alcohol top layer.

Getting patrons to order their final drink orders before closing time.

It has been a long-standing tradition for staff and a few regulars to drink inside the locked bar after close without other randos being there.

Basically, this is a short drink made of spirits and other mixers, but in a small or short glass.

Originally a mix of gin, vermouth, and bitters, it’s become an umbrella term for any cocktail served in a standard martini glass.

It is roughly translated as “everything in its place”, and it describes the setting up of a work environment of a bartender, specifically the garnish tray, straws, and napkins.

A cocktail served over crushed ice.

Non-alcoholic drinks that are mixed with liquor. Eventually will form a cocktail, call, or well drink.

Mix ingredients by using a tool known as a muddler.

Poured straight from the bottle at room temperature without ice. Usually a 2-ounce pour.

A drink to cap things off during the evening.

Drinks on the rocks basically mean served over ice, like whiskey on the rocks. They are served in rocks glasses or lowball glasses.

Pony shots are equal to 1 ounce.

A pre-shift meeting to go over specials, 86’d items, or any other newsworthy shares.

You can rim a glass with lime juice or lime slices, then dip the rim into salt or sugar (salt for drinks like Margaritas, sugar for sweet cocktails).

When you “rinse” a glass, you swirl the liquor around in the glass, creating a thin coating. You can do this to enhance some of the flavors.

Combining ingredients by pouring them into one another repeatedly.

This term comes from a variation of the Kir cocktail served with sparkling wine rather than still white wine, the Kir Royale.

The service bartender is the person who makes drinks for all customers who do not order from the bar directly.

It consists of a mix of alcohol or straight liquor that is swallowed whole in one go.

In this method, a cocktail is shaken in a shaker tin, then strained into serving ware.

Shaking drinks in a shaker.

Shake ingredients with ice and drain liquid from shaker tin.

Mixing cocktails is done with this metal cup-like tool.

A shot glass full of alcohol that’s thrown back and drank quickly.

All cocktails made with lemon or lime juice could be considered in this category. A sour cocktail is a combination of the following ingredients: spirit, lemon juice, and simple syrup. For example, a whiskey sour or amaretto sour.

The practice of bartenders or restaurant servers sneaking a shot during a shift.

In addition to shaking and building a drink, stirring is usually the preferred method for drinks made with spirits alone, without fruit or citrus juices. Ingredients should be agitated less, and water dilution controlled.

Watered-down drinks due to excessive ice.

The act of one party sitting down and another getting up is known as a turn of the table.

The peel of a citrus fruit that is added to beverages for flavor and decorative purposes, either directly in the drink or hanging from the side of the glass.

Served chilled, a drink is strained into a glass without ice after shaking or stirring.

When the bar does not receive a specific spirit brand request, this is the bar’s default bottle.

A separate glass of water served behind a drink served neat.

More mixer and less alcohol than what the recipe calls for. This term is also used when ordering martinis. You should add more vermouth to a martini than usual.

Is Something Missing Here?

Did we miss some bar lingo? Local Bartending School would love to hear from you if you have a term you think we skipped over.

Want to Step Up Your Bartending Game and Learn More?

Coaching new and experienced bartenders and various bar owners has given the team at Local Bartending School a lot of insight. It’s our goal is to share the knowledge and skills that make tending the bar so much fun. And profitable, of course.

You can also check out our blog, recently named one of the best bartender blogs to read by Feedspot!

Want to Learn How To Bartend from the Most Trusted Network of Instructors?

Learn from the largest network of local bartending instructors! With years of experience and the best instructors around, you’ll be certified in just a week.

Start a career in bartending today by contacting us! 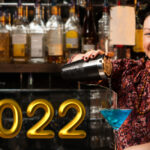 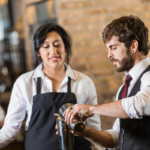 Next post The Importance of Training Your Bar Staff

Carrie Lipe has been writing creatively since childhood but jump-started her professional writing after college. She's an Indiana native, Ball State Hospitality graduate, and a bartender with over 10+ years in the industry. You can find her making basil Moscow mules when she's not writing. Follow her professional journey on Instagram! @contentbycarriejean

The Secret to Making More Money with Specials 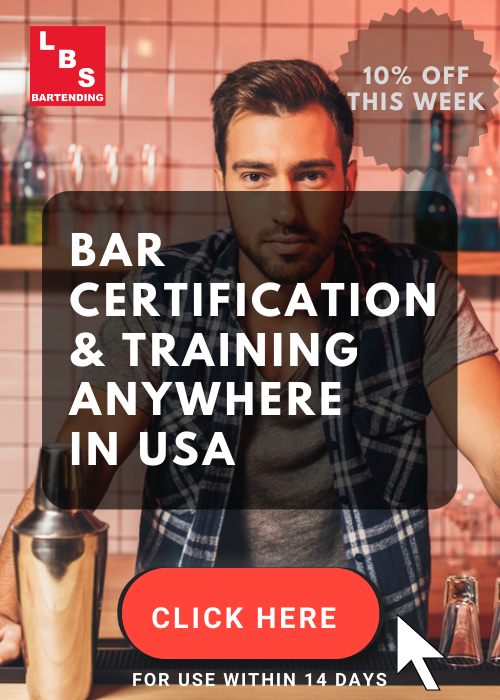 The Secret to Making More Money with Specials